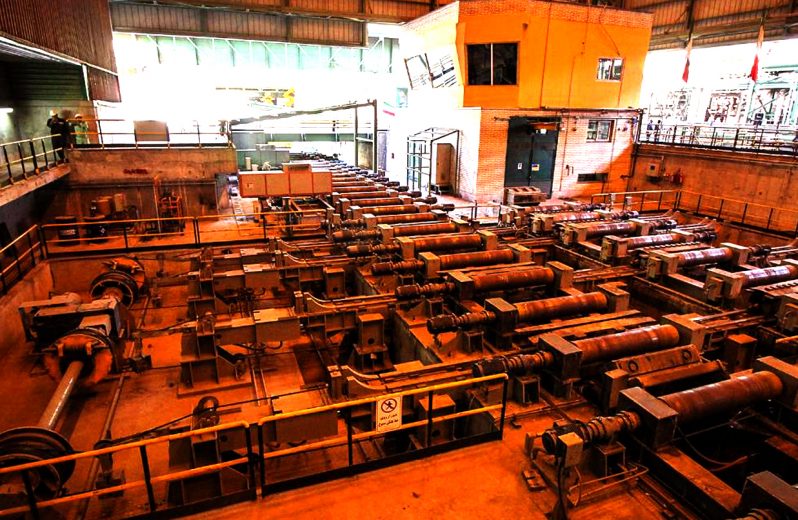 In the 30 days to November 21, 2017, hardworking personnel at the Steelmaking and Continuous Casting Unit of Mobarakeh Steel Company (MSC) set new monthly and daily records and registered the highest utilization of Casting Machine No. 5 in cooperation with other units in the company and in line with MSC’s stated objective of reaching the nominal production capacity of 7.2 million tons of crude steel.
The head of the Steelmaking and Continuous Casting Unit confirmed the news and appreciated the tireless efforts of the personnel of his unit for the achievement. “To materialize the company’s pre-determined goals and in the wake of the MSC managing director’s stress on maximum use of the existing potential, the personnel at the unit made constant efforts and employed teamwork techniques and displayed deep engagement. What they did bore fruit and they could set a valuable record when it comes to production at the Steelmaking and Continuous Casting Unit.
Mohammad-Reza Banaian Mofrad described as very effective the role of Casting Machine No. 5 in this breakthrough and said that the production volume of Casting Machine No. 5 reached a record high of 152,500 tons in the 30-day period.
In parallel, all sections of the unit improved their performance, he said, adding that on October 31 the volume of molten material rose to 21,896 tons for the day. Meanwhile, the average number of cast melting on a daily basis rose to 109 during this month.
He further said the average molten rate set a record in the electric arc furnace, the tap-to-tap time (the time between unloading a melting pool and another) was reduced to 101 minutes and a record was set in sending hot slabs to the Hot Rolling Unit. “On the back of these tireless efforts and achievements, the company has managed to register slab production of 580,332 tons per month, which is a record high.”
He said his unit has had plans to produce 540,000 tons on a monthly basis, adding thanks to this valuable achievement the unit’s production has posted a 7.4 percent increase over the envisioned plan and a 1.75 percent rise over its last record which came in the 31 days to May 21, 2017.
Banaian Mofrad further said all previous records had been set in the first half of the Iranian year (which has six 31-day months), but the most recent record was set in a 30-day period. In the last record which was set in the 31 days to May 21, the average width of slabs was 1,303 mm, but it was slashed to 1,262 mm (down by 41 mm) in the 30 days to November 21, he said, adding this leaves a considerable impact on the monthly production volume and boosts the value of such record setting.